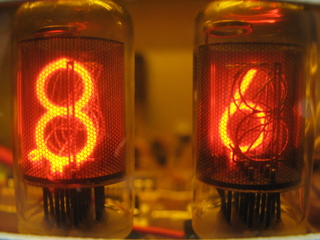 My first ever digital multimeter was a Heathkit IM-1212.  I built it from a kit when I was a teenager (thanks, Dad.)  A whopping 2½-digit, 200-count unit with 1% ± 1 digit basic DC accuracy.  Barely a step up from a basic analog VOM, but at least you didn’t have to count divisions or figure out where the decimal point went.  The display used two Nixie tubes for the numbers.  Later on I converted it to an LED display, which pretty much destroyed its ‘coolness’ and ‘retro’ appearance.  Not very photogenic or blog-worthy nowadays…

But roughly ten years later, a friend asked me to build a new-old-stock Bell & Howell IMD-202-2 kit.  It’s actually the exact same meter as the Heathkit, except with the Bell & Howell name on the front.  For reasons I don’t remember, the friend never took possession of the completed unit, and it has been stored away for a long time.  But now it’s time for a look!

This meter uses a very simple design.  There is only one op-amp, an LM301 which comprises the AC converter.  There are a few 7400-series chips: two 7490 decade counters, a dual J-K flip-flop for the leading ‘one’ digit and over-range indicator, and a couple of quad-gate packages for some timing tasks.  The Nixie tubes are driven with open-collector 7441 BCD-t0-decimal decoders.  Most of the analog-to-digital converter (ADC) is implemented with discrete transistors.

The ADC is a single-slope voltage-to-time converter with a full-scale input of 2 volts.  A FET constant-current source charges a capacitor to create a ramp signal.  As soon as the ramp builds enough voltage to turn on a BJT (about 0.6V), a clock signal is gated through to the display counters.  This ramp is compared to the input voltage using another BJT, and when it reaches the input voltage plus the BJT turn-on voltage, it gates the clock signal off and discharges the cap.  The larger the input voltage, the longer the counters are allowed to count.  That’s basically it! 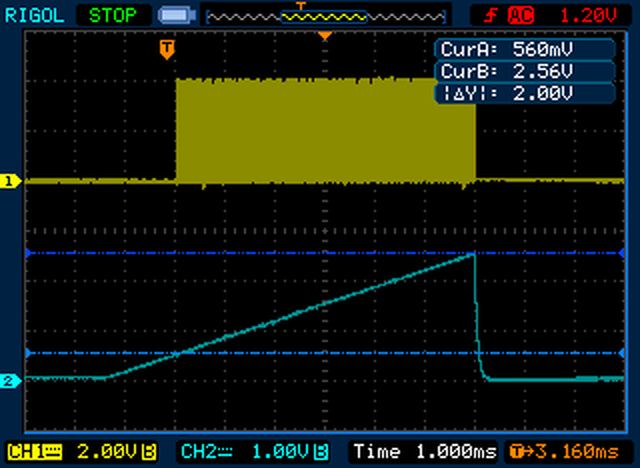 This shows the ramp signal and the clock during a single ADC conversion cycle for a 2.0V full-scale signal. Notice the clock does not start until the ramp has reached about 0.6V. The clock stops when the ramp is 0.6V above the input. This is because the ADC is using BJTs to detect the input and ramp levels.

The clock signal is generated from a basic two-transistor astable multivibrator circuit.  System timing is derived from a sample of the AC mains frequency, therefore the system performs 60 conversions per second by counting for half of the 16.67ms cycle and displaying for the other half.  The display tubes and lamps are driven from a high-voltage winding on the transformer that has been half-wave rectified.  This insures that tubes are displaying for half a cycle, and blanked during the other half, while the counters are counting.  Clever. 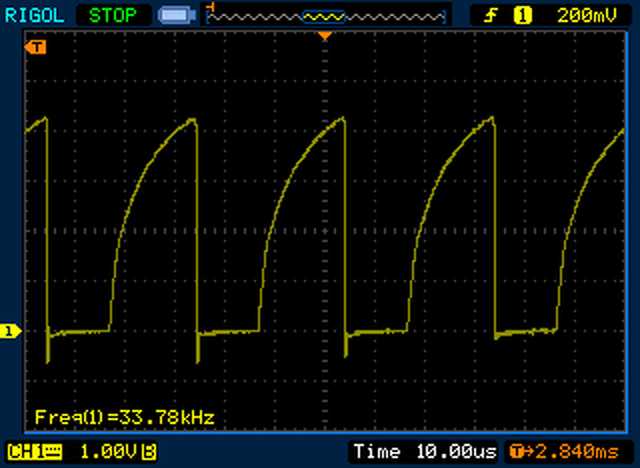 Clock signal generated by a classic two-transistor multivibrator circuit. This one measures 33.78kHz. The frequency affects accuracy, and is affected by the stability of the film caps and carbon composition resistors in the multivibrator. 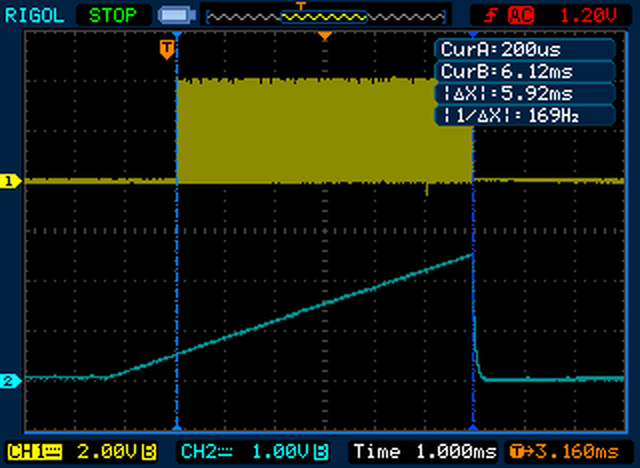 The long-term accuracy of this design is not great, since it depends entirely on the stability of the clock and ramp-generation components, and not a stable voltage reference.  In fact, I remember re-calibrating my unit quite regularly when the temperature changed significantly.  The Heathkit factory provided a zener diode and two voltage-divider resistors in a separate envelope in the kit.  The three components were measured on factory equipment and the voltage was recorded on the envelope.  This became the unit’s unique DC calibration voltage.  A test point on the circuit board allows the user to calibrate (or re-calibrate) the meter without needing extra equipment.

Now that you’ve suffered through the EE stuff, let’s take it apart and look inside.

Fixologist and multimeter junkie.
View all posts by modemhead →
This entry was posted in Teardown and tagged DMM, Vintage. Bookmark the permalink.