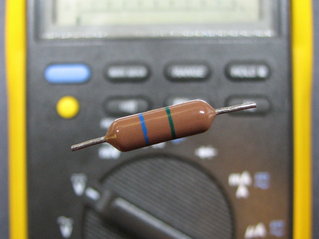 Properly-designed multimeters that are suitable for professional and trade use have a number of components, usually near their input jacks, that are for the sole purpose of protecting both the user and (secondarily) the multimeter itself from over-voltage and over-current situations.  Everybody knows about fuses and can probably recognize them right away.  But the fuses are only used to protect against having too much current passing through the meter and test leads when using the Amp and/or milliAmp jacks.

There are a number of other protective components you may find near a multimeter’s input jacks.  Some are connected in parallel with the input source, and are meant to trigger when the voltage across the input reaches a dangerous level, becoming a low-impedance path to essentially short-circuit the energy away from the rest of the meter’s sensitive circuitry.  These components are usually spark gaps and/or varistors (MOVs).

Others are connected in series, and will become an open circuit or high impedance when something goes awry and too much energy is being absorbed.  These components are usually PTC thermistors and/or fusible resistors.  The latter component masquerades as a regular high-wattage power resistor, and is sometimes also described as “flame-proof”.  Thermistors should return to their normal impedance after the overload is removed and they have cooled down, but once a fusible resistor has “blown”, it no longer functions.

Many (but not all) models of Fluke multimeters include a fusible resistor in series with the Volt/Ohm input jack.  The meter shown in this repair is a first-generation Fluke 87.  The metal-film fusible resistor is designated R1 (part #832550) in the model 87 parts list.

In the service manual it is described generically as a “1kΩ 2W fusible resistor.”  This resistor is a common failure point for a unit that has been subjected to an over-voltage situation.  Tried to measure the output of an electric fence, maybe?  (Don’t do that.)

Disclaimer: The following describes an amateur repair on a component that is critical to the safety specifications of the device. In cases where safety ratings are mandated, it is advised that repairs be performed by authorized service centers with manufacturer-approved parts. 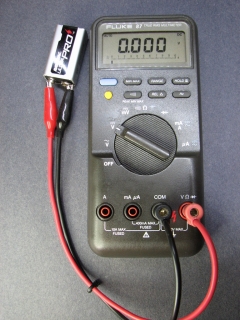 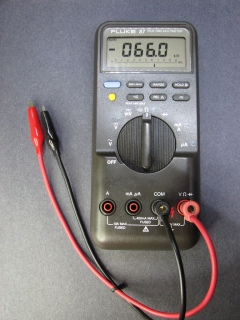 Resistance is selected and the leads are left open. A functional meter would display a steady OL, but this one displays positive and negative random numbers and sometimes flashes OL.  If the beeper is turned on, it will beep randomly. 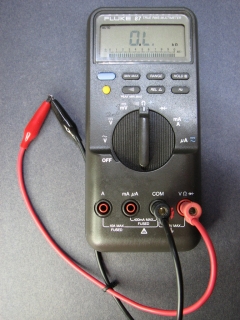 Shorting the leads would normally cause the meter to read a value near zero, say about 0.2 ohms.  But this one flashes OL rapidly.  (The dim digits in the photo is a result of the flashing.) 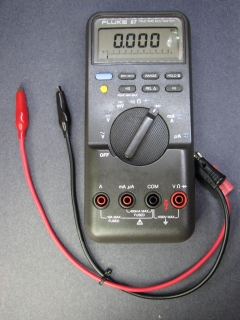 On the diode check range, with no leads connected, the meter would normally read OL.  Instead this one seems to be stuck at  0.000V. 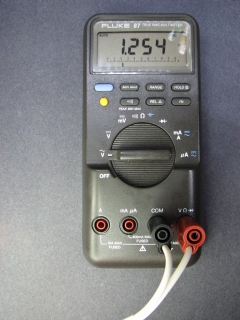 Attempting to measure 120VAC mains results in a very small unsteady voltage being displayed.  The broken resistor is capacitively coupling a small voltage into the front end. 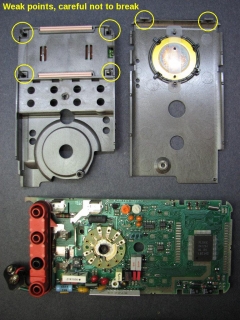 Begin repairs by disassembling the meter.  For this particular repair, you may get by without removing the shields as shown.  But I like to set aside the plastic parts while waving a soldering iron around.  If you take off the shields, pay particular attention so as not to break the fragile bits, marked on the photo at left.  Breaking one’s fragile bits leads to a bad day. 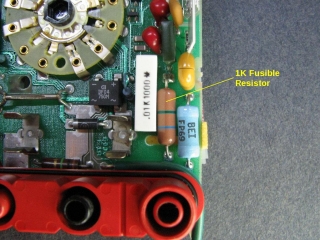 Locate the fusible resistor.  It is usually light brown in color with two color bands.  (Don’t ask me what the colors mean, I’ve never figured it out.) 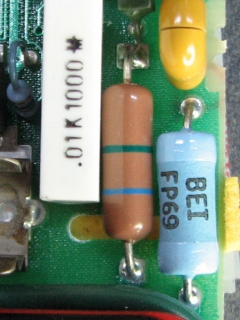 Do not confuse the fusible resistor with the Ohms sense resistor, which will almost always be very close by, since it also connects directly to the red input jack.  This one is light blue and is 909K ohms.  The ohms sense resistor in most Fluke models is usually at or near 1 Meg. 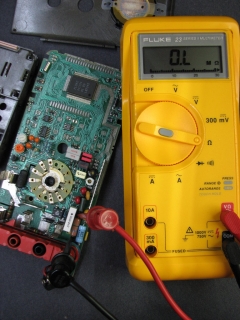 Using another multimeter, we can confirm that this fusible resistor has failed open.  A good resistor would read about 1K ohms, this one shows open. 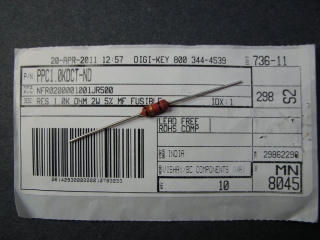 The replacement I’ve selected is a 1kΩ 2W Vishay metal-film fusible resistor.  It is 5% tolerance instead of the original 1%, but the value of this resistor does not affect the calibration.  (It is in series with the voltage divider’s 10 Meg input impedance, which far outweighs any variations in this resistor.) 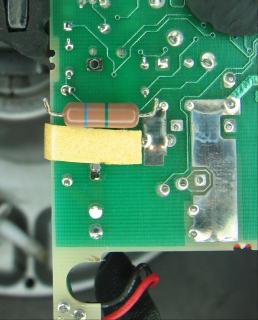 De-solder the old resistor and clear the holes of solder.  A solder-sucker and/or solder wick is handy for this. 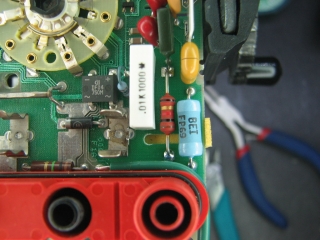 Solder the new resistor in place.  Be sure to clean any flux residue left on the board with IPA.  Residues and contamination on the PCB are not a good thing in the front end of a digital multimeter. 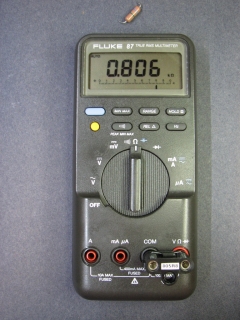 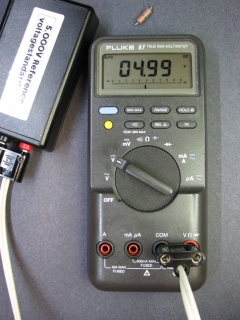 Checking VDC calibration with a 5.000VDC reference.  One count off.  Not a problem. 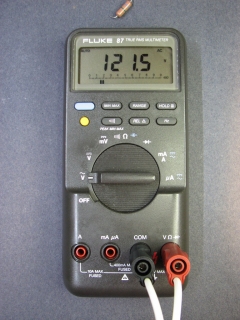 Update: After I prepared this article I discovered that DigiKey (and Mouser, Newark, etc.) no longer stocks the replacement resistor I used. The following are possible sources of replacement parts.  Note that non-Fluke replacements are not guaranteed to return the device to its original safety specifications.

Fixologist and multimeter junkie.
View all posts by modemhead →
This entry was posted in How-To, Repair and tagged 80-series, DMM, Fluke, Safety. Bookmark the permalink.