There seems to be a trend in Fluke repairs here lately.  Other than your occasional fusible resistor, the problems seem to be related to materials instead of electronic bits.  Cracked and broken plastic, and metal fatigue.  Are these design problems, or is it that people use these devices so heavily for so long, that the finite lifetime of these metal and plastic parts is exceeded?  Well you be the judge of that, I’ll just look for a way to make repairs.

Today’s issue concerns the jack assembly for the Fluke 80-series of DMMS including the 83, 85, 87, and 88 models.  Instead of individual 4mm banana jacks, there is a single molded assembly containing all four jack ports.  Each jack consists of two half-round contacts inside a red or black colored shroud.  The two separate contacts are used to detect when a plug is inserted in the A or mA jacks on the left side.  Inserting a plug shorts the two halves, which is detected by the meter and results in a chirping sound when the rotary switch is set for anything other than current measurement. 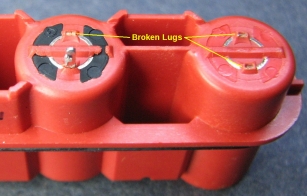 The entire 4-port jack assembly is soldered to the circuit board with 8 small solder lugs extending from each jack half.  The problem occurs after many plug insertions and removals have stressed the lugs enough to break them.  There is no outward appearance of a problem, instead it manifests itself as intermittent readings, affected by pushing on or wiggling the probe plugs.  The broken lug cannot be seen without de-soldering the entire jack assembly.

This problem seems to affect the COM and V+ jacks the most, because they are used the most.  Fortunately those two jacks do not actually need to have the two separate halves and indeed the pairs are soldered to the same point on the circuit board.  So that allows for the repair described here, where a single piece of brass tubing will be substituted for the original contacts.  Brass tubing is readily available, and solders well.  And aside from a little tedious grinding, it makes for a reasonably quick repair without having to spend $$$ for a new jack assembly.

Disclaimer: No effort has been made to insure that this repair maintains the original specifications with regards to safety or Category ratings. Performing this repair on a unit used where such ratings are mandated is not advised.

Tools required for the procedure include a 5/32″ (4mm) drill bit, a 3/16″ (4.8mm) drill bit, and a pin vise.  I like to use a pin vise instead of a powered drill because it reduces the chances of an “oops” moment where the bit snags and you end up breaking the piece you’re working on.  A rotary tool such as a Dremel or Proxxon is essential for cutting and shaping the brass tubing.

First, the old contacts have to be removed.  This is done by drilling out the plastic at the back of the port with the 5/32″ drill bit.  Each contact is then dislodged by tapping with a hammer and screwdriver and pushed out of the back side.  Do not attempt to remove them from the front because the plastic shroud’s inside diameter is narrower there.

This will leave two ridges, and two little bumps of plastic where there were holes in the contacts.  This material can be reamed out with the 3/16″ drill bit.  A twist drill makes a lousy reamer for this tough plastic, so the interior will be rough, but that will not be a problem.  The original contacts are 17mm long, so the drill bit should not be allowed to go deeper than that, or the plastic inner shroud will be damaged.

Next, the replacement jack tubes are fabricated from brass tubing stock.  A piece of tubing cut 21mm long, with 4mm lugs ground on one end, will leave 17mm to insert in place of the old contacts.  For my initial effort pictured here, I used 20mm with 3mm lugs, but that was cutting it a bit close, so I suggest an extra 1mm to be sure.

The completed jack tubes are secured inside the jack assembly by smearing with cyanoacrylate gel (thick superglue) and pushing into place.  The jack tube will be securely held in place by soldering to the circuit board later, so this glue is basically for filling the gaps and holding the tubes in place for the rest of the repair process.

Now the back ends of the jack tubes are re-sealed using some quick-set epoxy (JB-Weld Kwik, in this case.)  To keep the epoxy from oozing down into the jack tubes and causing an obstruction, plugs are made from cotton buds coated with petroleum jelly.  The stick makes a convenient handle to remove the plugs later.  After the epoxy starts to set, the excess is trimmed so that the jack assembly will still set flush on the circuit board.

This repair should be practically undetectable from the front, aside from the full-cylinder brass tube instead of the original split plated contacts.  Before soldering the rebuilt assembly back on the circuit board, the new lugs are scraped to insure no epoxy material is stuck there, which would make soldering difficult.  I used a liberal coat of flux and a 350ºC iron with a 1.6mm chisel tip to securely solder the assembly back on the circuit board.

Testing with a shorting bar shows that the resistance is the same as it is for a normal unit (0.0 to 0.2 ohms).

The longevity of this repair is unknown and up for debate, obviously.  I would not expect the brass tube to be quite as sturdy the original contacts which appear to be beryllium-copper (a guess.)  But by exercising caution when inserting and removing plugs I expect it could last a good long time.  Repair or no repair, it’s always a good idea to avoid sideways stresses by not tugging on the leads too much.

Fixologist and multimeter junkie.
View all posts by modemhead →
This entry was posted in How-To, Repair and tagged 80-series, DMM, Fluke. Bookmark the permalink.