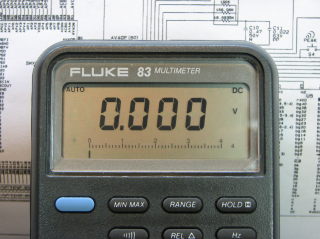 The Fluke 83 Multimeter is part of the 80-series that was introduced in the very late 80s.  This unit is the lowest model in the line-up and has a basic DC accuracy of 0.3%.  It does not have an RMS AC converter or a backlight like its venerable cousin, the model 87.

This example arrives without its usual yellow holster and is completely dead.  No display at all.  Inspection of the internals reveals no particular problems, except for the fact that someone has inserted the wrong fuse at the F1 location.  This should be a BBS-1 fast-blow fuse, but a 1A time-delayed fuse has been installed instead.

Further disassembly reveals that one of the four plastic clips holding the LCD assembly to the main PCB is broken.  These four clips are necessary to maintain even pressure on the elastomer connectors between the PCB and the LCD.  A gentle squeeze with thumb and forefinger while the meter is turned on still reveals absolutely nothing on the display, so this is not the main problem.  It could however, lead to problems later. 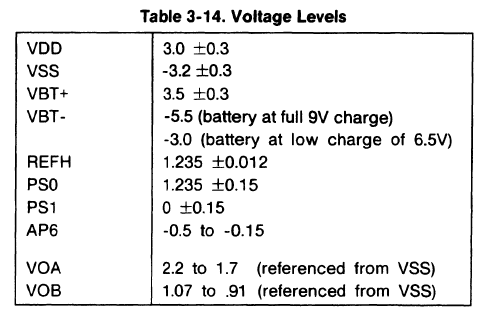 Touching an oscilloscope probe to both sides of the clock crystal reveals that there is no clock signal at all.  Maybe there is a power problem.  The service manual has a handy chart for the voltage levels on the board.  The power supply for the meter is bipolar, meaning it has both positive and negative potentials with respect to the circuit ground.  Vdd is the positive rail at 3.0V, and Vss is the negative rail at -3.2V.  Circuit ground is referred to as ‘digital ground’ in the manual and is connected to the COM input jack.

Inspection of the schematic reveals that the negative end of C21 is connected to Vss and the positive end of C14 is connected to Vdd.  Both of these caps are 47μF and are relatively large, making for easy places to find and probe these voltage levels.  The COM jack makes a convenient ground connection point.  A DC power supply set at 9.0V is connected to the 9V battery clip of the meter.  This insures that the full nominal input voltage is available for further measurements.

At this point, Vdd measures 2.35V, and Vss measures -0.07V with respect to ground (the COM jack.)  Both of these numbers are approximate, because the readings are unstable and appear to drift up and down a bit.  Not good at all, especially Vss.  Let’s see what the service manual has to say about power supply trouble-shooting:

3-34. TROUBLESHOOTING – POWER SUPPLY
The two regulator circuits are interrelated; a malfunction in either the common regulator or the Vdd regulator may cause a problem in the other.  Refer to Tables 3-13 and 3-14 for descriptions of power supply components and voltage levels, respectively.  To isolate the problem regulator circuit, disconnect the battery, and drive Vdd – Vss = 6.2V with a power supply.  This procedure tests the common regulator independently of the Vdd regulator. 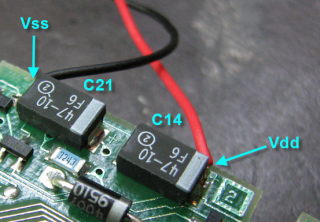 It appears that there are two different, inter-connected voltage regulator circuits, and we will have to isolate the problem to only one.  To do this, an external DC power supply must be set to 6.2V and connected across Vdd(+) and Vss(-) , as instructed.  This takes over the job of the Vdd regulator, and leaves the Common regulator free to do its thing (or fail to do its thing.)

I soldered two small wires to the cap leads identified earlier to facilitate this hook-up, and continued with the service manual instructions:

Vdgnd (and sometimes DGND) is the service manual’s nomenclature for ‘digital ground’, which is represented on the schematic as a ground symbol with a ‘D’ in it, and is connected to the COM input jack.  Measuring between ground and Vss yields a reading of -0.33V.  This is nowhere near the nominal -3.2V called for, so according to the manual the problem lies with the Common regulator circuit.  Continuing with the procedure: 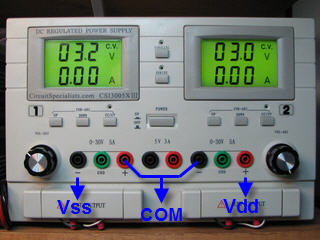 Now we’re directed to connect two external power supplies in such a way that it overrides both on-board regulators, in order to perform further tests.  The manual tersely informs us of the expected currents to be drawn from the power supplies, so that must be important.

Vref measures 1.236V.  Practically spot-on, so let’s continue with the next step:

The current indicated by the multimeter I have in series with Vss indicates 133mA is being drawn.  This is not good.  The manual suggests Q12 as a possible problem.  Checking the base-emitter voltage on Q12 shows it to be biased on.  The collector is tied to ground, and the emitter is tied to Vss, so if it’s on, it will be essentially shorting ground to Vss.  That would definitely cause a serious problem while the meter is supposed to be ON.  Q12 is not supposed to be on when the meter is on, so let’s just temporarily remove it and see what happens.

After removing Q12, the LCD assembly is replaced and the meter is connected to normal 9V power through the battery clip.  It turns on, boots up, and measures a 5VDC reference voltage perfectly at 5.00V.  That’s progress, but we don’t know why Q12 is on when it should be off.  A check of its base-emitter and base-collector junctions show good readings on a DMM diode-check range, so the transistor itself is not the root cause.

The base of Q12 is tied directly to the output of one of the inverters in a CMOS hex inverter package (U6).  Note that U6 is powered directly by the battery voltages Vbt+ and Vbt-.  (This is interesting, it means the chip is always powered on, regardless of the meter’s rotary switch position.)  With Q12 removed, the voltage at pin 8 (inverter output) is 3.62V which is definitely a logic high.  The voltage at pin 9 (inverter input) is -2.52V which is a logic low level.

To completely check the inverter operation, I temporarily connect a 10K resistor from Vbt+ to pin 9, to provide a logic high.  The voltage at pin 8 goes to -5.18V, a logic low signal.  That means the inverter is working correctly.  So whatever drives the ‘PDS’ signal now becomes prime suspect.  Something is pulling it ‘down’, making it a logic low level, when it shouldn’t be. 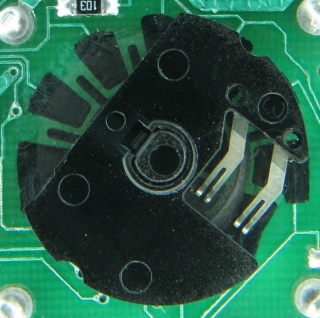 The PDS signal originates from the ‘Code Switching’ portion of the schematic.  There is a concentric circular arrangement of black-colored pads on the PCB behind the rotary switch, under a rotor carrying one pair of contacts that short across these pads as the switch rotates around.  The black material is not metal, but is a conductive polymer thick film (PTF) deposition.  This whole assembly is represented somewhat ambiguously on the schematic as S2.

It’s purpose is to provide the meter’s processor with a way of determining which measurement function has been selected by the rotary switch position. 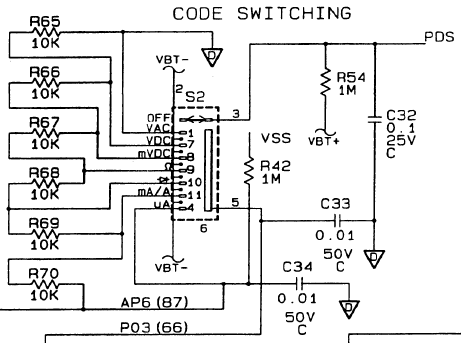 If the processor raises AP6 to some known voltage, the resistors R65-R70 form a voltage divider stack with taps going to different pads on the switch.  The voltage level on P03 will then indicate which position the switch is in.  (This functionality can be tested in a ‘Rotary Switch Test’ initiated by holding the ‘Range’ button while powering up the meter.)

To complicate matters, there are ‘fingers’ in-between the pads that are connected to Vbt-.  These will cause the sense line P03 to ‘blip’ down to Vbt- as the switch is rotated between functions, providing a signal to the processor that the knob position has changed.  It is unclear from the diagram, but a close examination of the switch after gently popping the rotor off of the hub reveals that the PDS signal we’re interested in, is bridged across to this Vbt- trace when the switch is in the OFF position.  It is unconnected when the switch is in any other position.

To summarize: when the switch is OFF, PDS is logic low, inverted to a logic high by U6, which turns on Q12, clamping Vss to ground.  When the switch is in any ON position, PDS is pulled up to a logic high by R54/Vbt+, inverted to a logic low by U6, turning off Q12.  Keep in mind that U6 and these logic levels are powered straight from the battery, and are unaffected by the meter being turned off via the rotary switch.

During all this close examination of the code switch in order to find out how it works, it has become clear what is the root cause of the problem.  The switch has undergone some sort of abuse which has ground away some of the conductive black material, leaving a significant amount of it between the pads connected to PDS and Vbt-.  The amount of current leakage through this material overrides the R54 pull-up resistor, keeping PDS at a logic low level even when the meter is turned on.

A generous amount of IPA (isopropyl alcohol) and a toothbrush clears up the conductive debris problem.  Examination of the rotor reveals nothing amiss which could have caused the problem in the first place.  The conductive black areas on the PCB are somewhat damaged, but not enough to cause malfunction.  The service manual calls for some obscure lubricant to be used here, but since I don’t have any, I am loathe to substitute anything that might be detrimental to the PTF material.

In this early generation of 80-series meters, the case has to be opened to replace the battery.  Perhaps some careless user allowed foreign matter to become lodged in the switch.  Also, there is the potential to engage the switch hub with the knob via its hexagonal shaft in such a way that it is not aligned properly.  This would allow the switch hub to be rotated beyond where it normally stops.  Some evidence of that can be seen in the previous gallery photo with the rotor removed.

Epilog: This entire troubleshooting procedure could have been avoided by a complete tear-down and visual inspection.  The cause of the problem was hiding behind the code switch rotor, and was easily fixed by a simple IPA cleaning.  But then we wouldn’t have learned how the ‘code switch’ works, and why the meter isn’t really off when it’s supposed to be turned off.  (It draws 8.85μA with the selector in the OFF position.)

Fixologist and multimeter junkie.
View all posts by modemhead →
This entry was posted in Repair and tagged 80-series, DMM, Fluke. Bookmark the permalink.