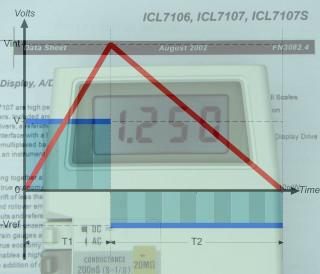 This is the first in a series of posts looking at how a digital multimeter actually works.  First a little theory, then later we’ll look at the ubiquitous ICL7106 that basically started the ball rolling on handheld DMMs back in the late 1970s, and is still used today in your basic $5 hardware-store cheapie.

At the heart of practically every handheld digital multimeter is something called a dual-slope integrating analog-to-digital converter (ADC).  It isn’t like the ADCs used to encode our music, videos, and telephone conversations.  Those type of conversions require an ADC to produce a steady stream of digital data necessary to accurately reproduce a very rapidly changing analog signal.

That is not the case in a digital voltmeter.  Instead, we want to observe a voltage, that may or may not be changing, and distill it down to a single number that accurately and repeatably characterizes that input voltage.  There’s no requirement to do it any faster than the human eye and brain can perceive it.  About 2 to 4 times per second is enough.  And we’d like it to give accurate results even in the presence of electrical noise, like the ever-present mains hum.

To accomplish this, an integrating converter is used.  To avoid getting into too much calculus, for the purposes of this discussion we can define integration as computing the area under a curve.  A DC voltage that does not vary with time is about the simplest “curve” there is, so let’s look at integrating a voltage V for an interval of time T. 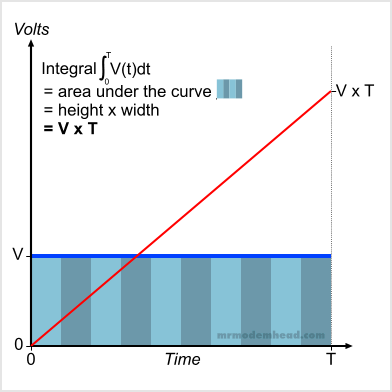 The real world hardly conforms to ideal circumstances, so let’s also look at a DC voltage that has a “noise” component.  Suppose that the voltage to be measured is the output of a mains voltage adapter, and that some remnant of the mains waveform is riding on top of the DC voltage.  If we simply sampled that voltage at two different points in time we could get very different values.  But this is a digital multimeter, and we’re interested in characterizing this DC voltage over a period of time, without worrying too much about the instantaneous values.  (If we were concerned with that, we’d be using an oscilloscope.)

Performing the integration is still the same process of computing the area under the curve, as shown in Figure 2.  If we look at the blocks that were rectangles in the last example, this time they’re a little more complicated.  But if you look closely, you will see that the “noise” adds a little extra area part of the time, and subtracts a little area during the other part.  As long as the noise is symmetrical, it will add as much as it will subtract, and our result will be the same V x T. 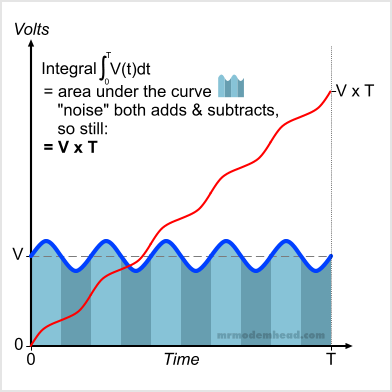 Figure 2.
Integrating a DC voltage V with a noise component for time T results in a slightly non-linear ramp that reaches the value V x T.

Saying that the noise signal is symmetrical is another way of saying that if that signal were measured by itself, it would have an average of zero volts.  And if the noise is not symmetrical, it will have a non-zero average, and that will either add to, or subtract from any DC voltage it is riding on.  That will change the integration result.  But that would also mean that the noise has affected our DC voltage, and we do want to measure that.  So we still have a correct and meaningful result by integrating.

You’ve probably gotten the idea by now, that by computing this integration value for a period of time, we are going to end up finding the average of our voltage input during that time.  And that is correct.  After all, that’s the first step of getting the average of a group of values, adding them up.  By doing this, we’ve minimized the result of any spurious noise, because it just becomes a small part of the aggregate value.  But what to do with this aggregate value?

Up One Side and Down the Other

The second time period is often called the “de-integration” or “read” period.  And it gives us the reason for calling this system a “dual-slope” integrating ADC. 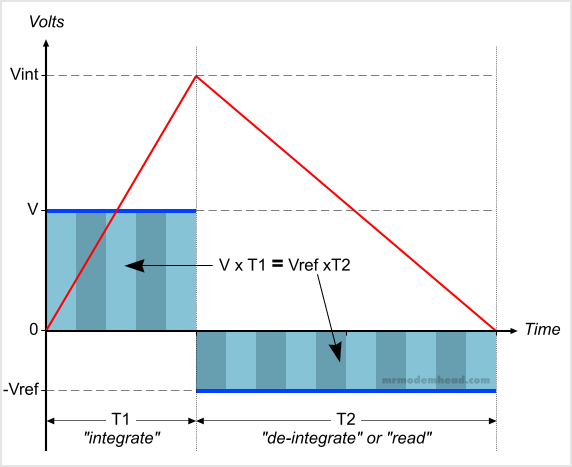 Since we started the second integration at the value produced by the first (Vint) and waited until it became zero, we can establish that the areas under the two curves are equal.  That means that V x T1 = Vref x T2.  Solving for V yields V = Vref x (T2/T1).  That bears repeating in big letters:

This is important because it means that if we have a nice stable reference voltage available (that we can invert the polarity of), then we’ve reduced the problem of measuring an unknown input voltage down to a matter of measuring time.  And time is easy to measure in the digital domain because all we have to do is count clock cycles!

So let’s take an unknown voltage and integrate it for 1000 clock cycles.  Then start counting clock cycles while integrating a fixed negative 1V reference voltage.  We wait until the integrated value reaches zero, at which point we stop counting the clock cycles.  Now suppose we happen to count 1250 cycles for T2.  Then V = 1volt x 1250/1000 or 1.250V.  Because of our cleverly arranged constant values, a direct decimal representation of the unknown voltage is sitting right there in the clock counter.  All we have to do is simply display the counter value in a nice digital display, and put the decimal point in the right place.

At this point, we have not covered what kind of real-world electronic circuitry can perform these operations.  So in the next “DMM Basics” post we’ll take a look at the ICL7106 ADC and LCD driver chip (datasheet).  In the meantime, have a look at this excellent video on op-amp basics, in particular the integrator circuit.

Fixologist and multimeter junkie.
View all posts by modemhead →
This entry was posted in Theory and tagged DMM. Bookmark the permalink.