Posted on September 8, 2013 by modemhead 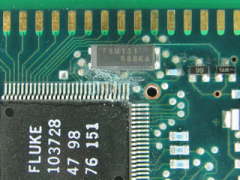 The Fluke 26-III and 79-III models are identical except for the model number.  This model adds some extra features not available on the 77-III (and its identical twin the 23-III), like frequency and capacitance measurement, 4000 counts vs. 3200, RMS response, and a faster update speed.  It also has a special 40-ohm resistance range that provides 10 milli-ohm resolution, aimed at electricians who may want to measure and compare contact resistances on relays and switches.  It’s not a bad tool for the electronics workbench either, provided you do not need precise measurements of current in the micro-amp range. It does however have 1μA resolution in its lowest current range (4mA).

This unit arrives in a completely non-functional state.  It doesn’t look too bad on the outside, but attempting to power up with a fresh battery results in absolutely nothing on the display.  Disassembly and a quick visual inspection, with particular attention to the battery connections, reveals no apparent damage to either the components or either side of the printed circuit board (PCB).  Both fuses are blown, but that’s about par for the course with a used multimeter.

One thing of particular note about the construction of this model, is that the microprocessor at the top is completely covered with a grounded metal shield.  It obscures the pins of the quad flat-pack (QFP) chip.

Diagnosis begins by checking the current draw of the meter when powering from a DC power supply set to 8.5V.  It measures 120μA, which is way lower than expected if this meter were actually running.  When turned on, there appears to be a regulated 2.98V from the COM jack to the positive battery terminal.  This means there’s at least one voltage regulator working in the power supply section (wherever that is, I’m working with no schematic here.)  But there must be no load on the supply, as if something is disconnected.

Closer inspection reveals a possible problem up near the microprocessor and under the shield.  The shield has to be removed for a better look.  It appears we have a small area of major crud.  This is isolated and a long way from the battery, so it would be hard to blame it on battery leakage.  In any case it appears something corrosive has come into contact with the PCB in this area.

Time for scrubbing with a stiff brush and isopropyl alcohol (IPA).  After the crud is removed, it becomes obvious that a copper pad near the microprocessor has eroded, leaving a trace broken and disconnected.  The pins of the microprocessor appear to be OK, despite a little discoloration.  There is a large 4-pin SMD component (clock crystal) in the area that will make repairs difficult, so it gets removed.  More cleaning and examination shows that there is also another area of erosion on that same trace.

Repairs to the broken trace are made with 30ga wire-wrap wire, stripped of its kynar insulation and tinned.  The 4-pin SMD crystal is re-soldered.  Checking the supply current now shows a more healthy 1.05mA is being drawn.  This is very promising.

The shield is re-soldered on, and the LCD re-installed.  The meter boots up and displays all zeros on VDC!  It measures resistance correctly, but checking with a 5.000V reference shows the calibration is off.  There is a pretty good chance that I may have disturbed the calibration pot with my brush while I was doing the initial cleaning.  Recommended calibration voltage is 3.5V, so a quick adjustment at that level restores calibration.  After cleaning the plastic parts and giving the scratchy lens a polish, this meter is ready for service again.

Fixologist and multimeter junkie.
View all posts by modemhead →
This entry was posted in Repair and tagged Corrosion, DMM, Fluke. Bookmark the permalink.