Not much time for blogging these days, but this one is overdue.  A reader of this blog was kind enough to send me his retired IBM 8060A/AA multimeter.  (Thank you HK.) This is really a Fluke 8060A in a light blue/gray case, with IBM branding.  Presumably IBM bought a lot of these for their engineers, field technicians, and laboratories.  It even came with its own special blue service manual, which another friend gifted me with a copy, so that I have a matching set for Mr. Modemhead’s Multimeter Museum.

END_OF_DOCUMENT_TOKEN_TO_BE_REPLACED

Just a note to say that Mr. ModemHead has been occupied with some of life’s realities the last few weeks (well, months actually) and hasn’t been able to respond to all your questions and comments.  The real-life situation is still on-going, but I hope to get more time soon to start updating the blog again.  In the meantime, feel free to keep the comments and questions going and remember there’s always active discussions about test equipment at the EEVBlog forums.  As always, thanks for reading and participating here.

Blog reader “Dmitri” has sent pictures of a very unique and interesting modification he performed on his recently acquired Fluke 8060A.  The LCD was ruined, so he has fashioned a replacement using green SMD LEDs arranged to form 7-segment numerals, with light dissipating film and protective acrylic from a broken iPhone.  The mask was cut with a German desktop milling machine.  The new display board was connected to the processor sub-board with the same kind of teflon-insulated wire used to connect the LEDs and ballast resistors.

END_OF_DOCUMENT_TOKEN_TO_BE_REPLACED

There seems to be a trend in Fluke repairs here lately.  Other than your occasional fusible resistor, the problems seem to be related to materials instead of electronic bits.  Cracked and broken plastic, and metal fatigue.  Are these design problems, or is it that people use these devices so heavily for so long, that the finite lifetime of these metal and plastic parts is exceeded?  Well you be the judge of that, I’ll just look for a way to make repairs.

Today’s issue concerns the jack assembly for the Fluke 80-series of DMMS including the 83, 85, 87, and 88 models.  Instead of individual 4mm banana jacks, there is a single molded assembly containing all four jack ports.  Each jack consists of two half-round contacts inside a red or black colored shroud.  The two separate contacts are used to detect when a plug is inserted in the A or mA jacks on the left side.  Inserting a plug shorts the two halves, which is detected by the meter and results in a chirping sound when the rotary switch is set for anything other than current measurement.

END_OF_DOCUMENT_TOKEN_TO_BE_REPLACED 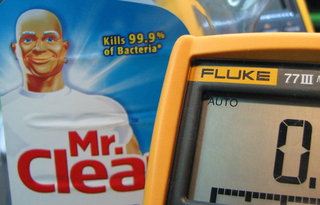 Recently someone asked how I get the old used multimeters featured in these blog posts to look shiny and clean.  For the most part, the answer is surprisingly simple: disassemble, scrub parts with soap and water, dry, and re-assemble.

But of course there are many details.  Results are rarely perfect with used equipment, but lots of improvement can often be achieved.  The normal published photo size on this blog is 1024 x 768, which hides some imperfections.  Here’s a couple of before and after photos with a little higher resolution.  Neither of these are perfect, but the improvement is worth the effort.

END_OF_DOCUMENT_TOKEN_TO_BE_REPLACED 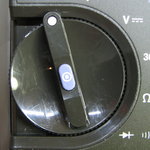 Happy New Year 2014!  Doing some housekeeping and software updates, found this information was buried in the photo galleries.