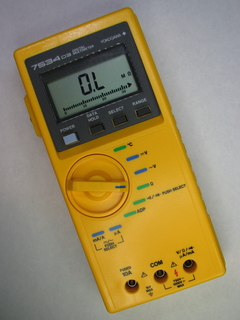 Japanese equipment maker Yokogawa made handheld DMMs for HP before HP became Agilent.  This 3200 count 3½ digit Yokogawa-branded model is very similar in appearance to the HP E2378A model.  Unlike the HP, this unit adds a high-impedance ‘ADP’ mode, presumably for current-clamp attachments and the like.  Otherwise, it has a very fairly mundane feature set.  It is also the only multimeter I’ve ever seen with a ‘Data Hold’ button on both the top and the side.

Opening the case reveals an obvious problem.  Something has gotten very hot and burned part of the circuit board.  There are burn marks on the inside of the case as well.  The resistor (R6) that died violently has already been removed.  There is a pencil-written note on the side of the unit that says “4.9 Ω 2 watt wirewound resistor”.  In retrospect, I realize this may have actually said “4.99 Ω”, but since it’s now been cleaned off, we’ll never know.  In any case, it was certainly helpful for someone to note what had been removed from the device.

Some simple testing shows that the DC voltage measurement function is still working and is reasonably well-calibrated.  Resistance measurement also works.  Only the current ranges do not work.   The meter passes current in the μA and A ranges but reads incorrectly.  No current is passed in the mA range, so the conclusion is that the missing/damaged resistor is the mA range current shunt, and is probably part of the voltage sense circuit for the other two ranges.  No schematics or service information can be found, so we’ll have to go on probabilities here.

Closer examination of the burnt PCB reveals that the larger copper traces are intact and relatively undamaged, aside from lifting slightly from the board.  There is one small trace missing that leads to a 1/8W 3.3K resistor, which is in parallel with the missing shunt resistor R6.  That doesn’t make a lot of sense, unless the designers intended to ‘trim’ the shunt a bit for more accurate readings.

Due to the amount of possible heat damage, the resistors surrounding R6 were removed from the board for testing.  All measured correctly, so the damage was limited to the shunt and the PCB itself.

4.9Ω 2W resistors are hard to come by, either in my spare parts inventory or from a parts supplier, so it looks like a non-ideal solution might be called for.  To start off, I tacked in a standard 4.7Ω resistor and checked the operation of the meter.  The current ranges all worked.  In fact, the A and μA ranges were OK.  The mA range was just a bit too low.  I decided it may be possible to substitute two parallel 1W 10.0Ω 1% precision resistors I had on-hand in place of the shunt, and then replace the ‘trim’ resistor with whatever produced accurate readings.  Again by experimentation, 600Ω was determined to work well.  So the 3.3K ‘trim’ resistor was replaced with a ¼W 600Ω 1% metal film resistor.

Given the nature of the malfunction and the somewhat um… ‘ghetto’ nature of the repair, a good check of the meter’s ability to measure current is in order.  Side-by-side comparison with another dependable DMM reveals that the repaired meter is reading quite accurately.

So let’s call that success, and make a few more observations.

This meter is quite ruggedly built.  The sturdy case halves are gasketed and fastened together with 4 machine-threaded screws going into big brass threaded inserts.  The input jacks have o-ring seals, and the lens is permanently sealed in.  The buttons are also sealed in with a metal retaining piece.

There are unpopulated footprints near the input jacks for what appears to be two MOVs and a spark gap, components that would provide over-voltage protection.  That, in combination with the use of small fuses, indicates this meter would not be considered appropriate nowadays for use with high-energy circuits.  Perhaps that’s the reason it has a warning sticker on the side that is remarkably at odds with the 750V~/1000VDC rating on the top.